This is the fifth and final post in this pesky series about five missing posts from years gone by. It ends my travail to revisit the prospects for finishing those posts. See the first post in this series for context and explanation.

Of all the five missing posts discussed in this series, this is the one that I will surely finish, for it is too central to TIMN’s potential to keep setting aside.


Comments on the video TIMN in 20 Minutes led to a series of Q’s-&-A’s posts during 2012. This prospective Part-7 post has been next-in-line for over a year, but I keep getting re-prioritized by one matter or another. Today this prospective post is still almost nearly next in line again.

What I have in mind will require new work in order to succeed in elaborating TIMN in a durable way. I plan to revisit old briefing slides and notions concocted years ago about how to lay out a mathematical model and identify indicators for TIMN. The post will discuss the pertinence of other models and indexes (e.g., the Index of Failed States and Index of Economic Freedom), along with Ian Morris’s book The Measure of Civilization (2013), and writings by Peter Turchin about cliodynamics. My approach will differ from theirs; it will not look so mathematically sophisticated, but it will be guided by TIMN’s organizational view of social evolution.

For the interim, I offer a screen-grab from a briefing slide I made during 2001-2002 in a draft effort to pose the possibility of modeling TIMN mathematically and visually: 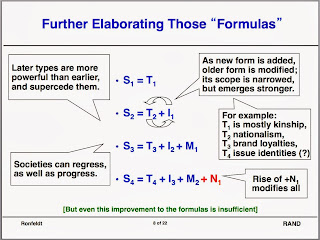 The slide barely conveys what a TIMN “formula” should look like. I’ll offer more explanation later. I’ve long yearned to see TIMN developed into a practical model, with clear indices, for diagnosing and strategizing about what’s going on in any society.

Posted by David Ronfeldt at 9:36 AM