Notes for a quadriformist manifesto — #3 cont.: Kate Raworth on four realms of provisioning


In Doughnut Economics: Seven Ways to Think Like a 21st-Century Economist (2017), Kate Raworth lays out her concept of the “embedded economy” and shows that “it is typically made up of four realms of provisioning: the household, the market, the commons and the state” (see image below). All four are important, and she “wouldn’t want to live in a society whose economy lacked any of the four … because each one has distinctive qualities and much of their value arises through their interactions. In other words, they work best when they work together.” (p. 67) 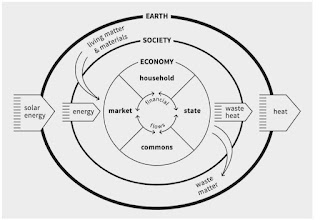 Elaboration: In her view, enterprises will increasingly depend on their ability to connect to all four realms. But of the four, only the state and the market receive full recognition from mainstream economics; the household and the commons remain sorely neglected. So she urges that all four realms be recognized and attended to in ways that develop a better balance among them. This will help achieve the overall goal — to shift from an extractive to a regenerative economy.

The future of the “commons sector” figures prominently in her framework. Much like other pro-commons theorists, she defines commons as shareable resources that are collaboratively managed. And she distinguishes among natural, cultural, and digital commons — the “global knowledge commons” being one of her keen interests. Thus, instead of people continuing to opt just for “market and state solutions alone,” she urges learning to “harness the power of the commons” in order to redistribute wealth and wellbeing more fairly and productively (p. 140). She echoes Peter Barnes, author of Capitalism 3.0: A Guide to Reclaiming the Commons (2006), and his call for creating a commons sector in which an array of “Commons Trusts” govern access to and usage of natural and other commons resources (p. 170).

Comparison to TIMN: While Raworth’s approach is less sweeping than the others discussed here, it parallels TIMN quite well. Her four economic realms correspond to TIMN’s four sectors. Moreover, she aims for all four to receive equal attention, and for their relations to be kept in balance — a basic TIMN principle — in part by strengthening the weaker two, households and commons. Yet, she is rather conventional about the composition of the commons sector, leaving it unclear as to what exactly it may contain in the future, other than what usually gets listed by commons advocates. Moreover, while she doesn’t offer an explicit evolutionary framework like TIMN and the other two reviewed here, she indicates that a proper recognition and development of all four realms could induce “the social and environmental transformation for which so many of us have been waiting” (Monbiot, 2017).

George Monbiot, “Don’t let the rich get even richer on the assets we all share,” The Guardian, September 27, 2017.
https://www.theguardian.com/commentisfree/2017/sep/27/rich-assets-resources-prosperity-commons-george-monbiot

Posted by David Ronfeldt at 9:57 AM